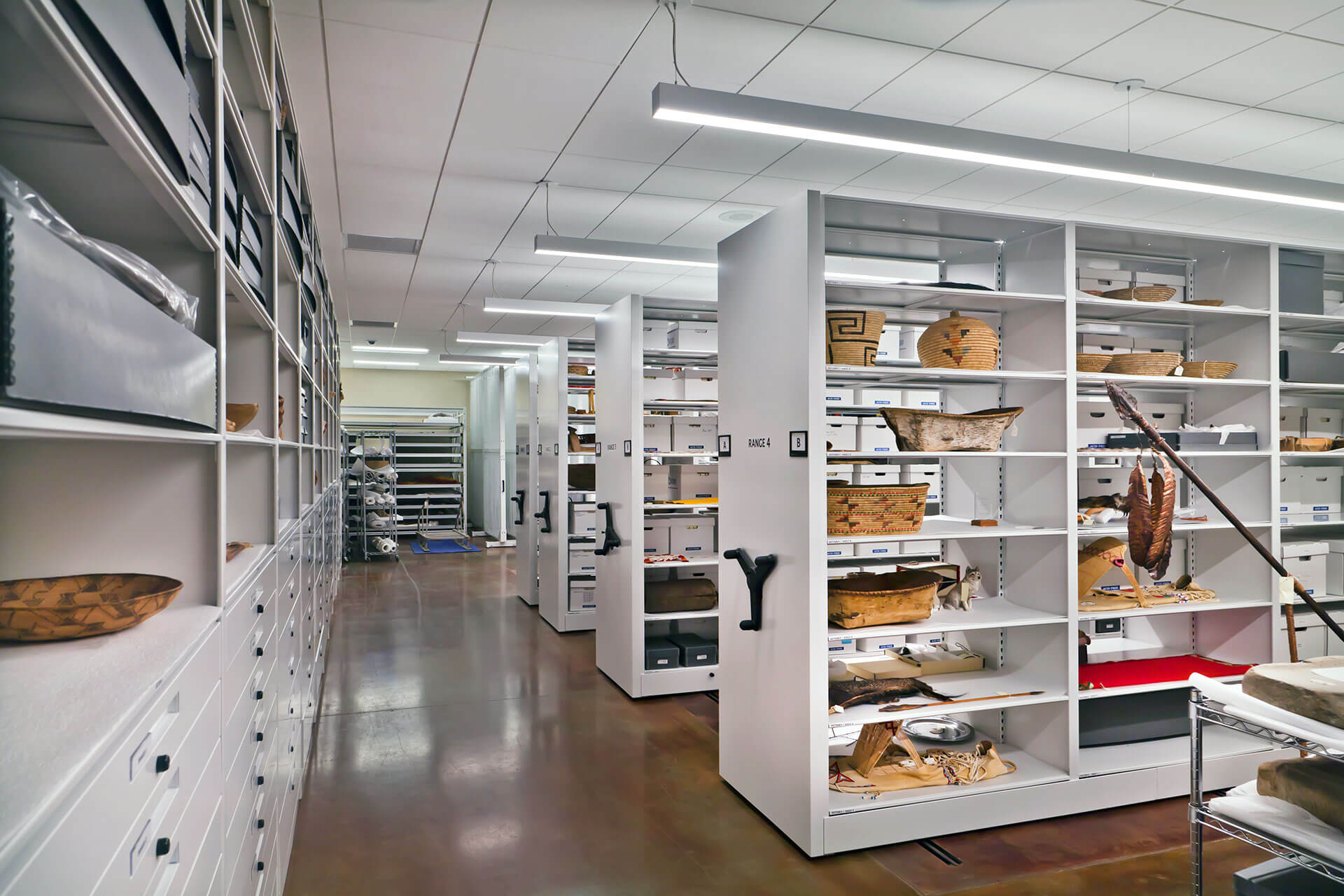 Hoċokata Ti’s private collection consists of a broad range of objects and materials representing over 130 cultures throughout the United States, Northern Mexico, and Canada.  The total number of objects in the collection is 10,476 and growing, with the vast majority being archaeological objects. The collection also includes basketry, pottery, beaded items, regalia, artwork, and more.

In 1993, the Shakopee Mdewakanton Sioux Community (SMSC) acquired Hoċokata Ti’s founding collection from Arlo Hasse, a longtime friend of the Dakota people. When the collection was initially acquired, the SMSC did not have a dedicated space to store the items. The need for a secure, climate-controlled collection area was one reason that inspired the creation of Hoċokata Ti. In the spring of 2019, the entire collection moved from a secure storage unit to the new storage area at Hoċokata Ti.

As a young boy working out in fields, Arlo Hasse noticed the prehistoric artifacts on the ground, such as ceramic pieces and arrowheads, and was intrigued by them and the cultures that made them. He started collecting these items on a regular basis. This interest in Native American items carried into his adult years, during which time he became friends with many tribes and people in Minnesota, including the SMSC and Norman and Amos Crooks. As a longtime friend of the Dakota people, he was adopted by the SMSC in June of 1977 at the Midwest All Nations Pow Wow.

The collection is used to illustrate exhibits and education programs, provide information for research, and inspire the public to know more about the heritage of the Dakota people. About a hundred or more of the objects from the collection along with objects from the Smithsonian Institute’s National Museum of the American Indian are on display in Mdewakanton: Dwellers of the Spirit Lake.

Collecting for the Future

To remain an active and dynamic tribal institution, Hoċokata Ti’s collection must be a work in progress, which means we seek new acquisitions, so that our collection is continuously evolving. As the collection grows, the collections staff assists in identifying and evaluating objects that not only meet the mission of Hoċokata Ti but also fit within the collecting scope. No museum’s collection is ever complete because history and culture never cease. To donate materials to the Hoċokata Ti collection, please contact us!

Caring for the Collection

Caring for the collection at Hoċokata Ti involves the development, storage, and preservation of objects and cultural heritage. The goal of managing collections is to meet the needs of the collecting institution’s mission statement, while also ensuring the long-term safety and sustainability of the objects in its care. A great deal of care and protection is required in order to ensure the safety of cultural objects from external loss or damage, as well as providing in-depth documentation to assist in tracking the life of the object.

How are objects stored?

It is vital to ensure objects in storage and on display remain undamaged while stationary. This includes accounting for padding and support of the objects to prevent damage from bumps and snags, and stable display cases or mounts, which often requires collaboration with a mount maker to ensure proper design and installation. The materials and equipment used are chosen based on their compatibility with the structural stability, design, and materials of each individual object as well as the overall long-term safety of the object.

How is the environment controlled?

Why the low light?